Go-Moku is a multi-player game similar to Tic-Tac-Toe. It originated in China and was believed to have been played as far back as 700 AD. Early five-in-a-row type games were mentioned in Chinese writings dating back as far as 100 AD and may be early versions of the game as we know it today.

Be the first player to get five in a row horizontally, vertically, or diagonally.

Players take turns each marking one square with their symbol, typically X and O, but other symbols can be used.

The first player to get five of their marks in a straight row horizontally, vertically, or diagonally is the winner.

In the example below the game was won by the player using the X symbol. 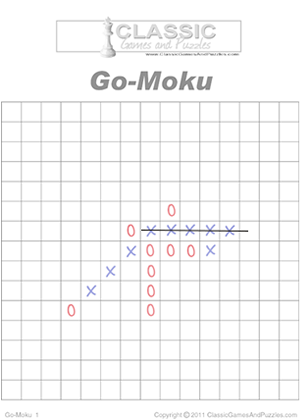 The game can also be played with more than two players. Try playing with four or more players. With the addition of each new player the game becomes increasingly more difficult to win. When playing with multiple players it may be easiest to assign each player a number rather than a symbol.