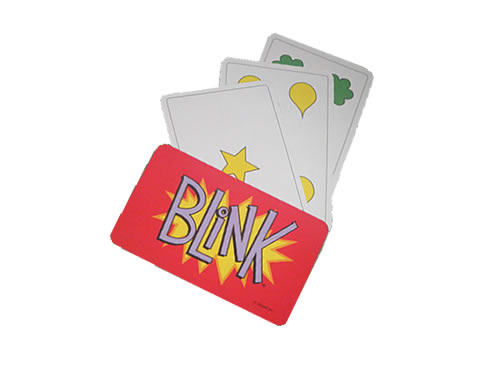 Blink is a fast paced quick thinking game that is fun for all ages. Our players range from ages 5 to well into their 80's. It’s a game of speed, observation, and quick thinking. A single game can be played in just a couple of minutes. It is intended to be a two player game, but can easily be modified for more players. It is claimed to be the world’s fastest game and it may very well be.

The game seems so simple yet quickly proves challenging for all ages. Don’t be too confident though. Have you ever been schooled by a preschooler? As adults we are clogging our brains with information about work, home, and life all while our preschoolers are spending their day working with shapes, colors, and numbers. This game reinforces what they are learning in school each and every day. You’ll be amazed how fast they can process the information and play a card.

Quick reflexes and quick response time are critical to winning. Playing Blink is an excellent way to improve hand and eye coordination. It has also proven to be a great way to keep kids occupied while at the same time releasing some energy.

The box recommends ages 7 and up, but we have found that younger children gravitate to it quite naturally. When playing with the younger kids we tend to deal them less cards to help even the playing field and keep it fun for everyone.

The version we purchased came in a handy metal box. The packaging along with the ease of play makes this a great travel game. It can easily be played in the car or taken on trips. It's great for camping, a lazy day at the beach, and it has been used to entertain while in the waiting room at the doctors office.

Beware though this game is addicting. The thrill of competition blended with the speed of play can keep you going for hours without even knowing it. We highly recommend this game as an addition to any family game night. It would also make the list of great family reunion games.

Blink has quickly become one of our favorite games and the wear on the cards shows it. Despite every attempt to keep everything together we have managed to misplace the instructions and when card game rules and instructions become misplaced there is a tendency to rewrite them from memory. As you can imagine this is not always the most accurate.

To help set things straight here are the rules based on the official rule sheet found in the most recent edition of Mattel's game Blink.

What's in the Box

Be the first player to successfully play all their cards.

Setting up the Game

1. The dealer shuffles the cards and deals them face down to form two equal draw piles.

2. Place a draw pile in front of each player.

3. Take the top card from each draw pile and place it face down between the players. These cards should be placed so they are accessible to both players.

4. Players take the top three cards from their draw pile and form a hand. Players may look at the cards in their hand.

1. Simultaneously players turn over the card that they placed in the center of the table signaling the beginning of the game.

3. Players may have up to three cards in their hand at a time and refill their hand by drawing from their draw pile.

4. Play continues until one player is completely out of cards from their hand and draw pile.

The first player that successfully plays all their cards wins BLINK.

1. Players may not play more than one card at a time.

2. On occasion when neither player can match the top cards on either of the piles, play is paused and —

3. Because BLINK is the world’s fastest game, many players prefer to play a best-of-three, or best-of-five, match to determine the winner.


BLINK is a registered trademark of Mattel.

Next time you are in need of a quick game to entertain the children or you have the opportunity amongst friends pull out Blink and play a few rounds.

Here is a fun video of Blink being played. Notice in the second round the game has been modified slightly to accommodate three players.

Return to Card Games from Blink

Return to Rules and Instructions from Blink