Barrel of monkeys and has entertained generations for decades. The game created by Leonard Marks, with the help of schoolmate and toy inventor Milton Dinhofer, was originally released under a different name, Chimp to Chimp,  and did not include a barrel. 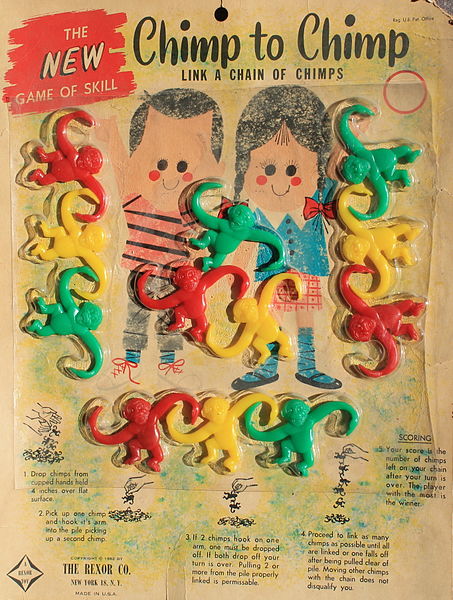 Eventually the game was pitched to Lakeside Toys executives. In attendance was Lakeside Toys' Vice President, James R. Becker, who while playing with the game made the commented that the game was “more fun than a barrel of monkeys”.  An agreement was reached and Lakeside Toys soon after released the game packaged in a cardboard barrel

The object of the game is to be the player to successfully create the longest chain of monkeys.

Setting up the Game

Shake up the barrel and dump the monkeys out on the table.

According to the directions that come with the game the player with the next birthday goes first. You can use whatever method you prefer to determine first play. It's fun for kids to watch the adults struggle with the game so maybe having the oldest person go first would be entertaining.

The player who's turn it is chooses the first monkey of their chain.

With great care the first player takes their chosen monkey and tries to use the monkeys arm to grab an second monkey from the pile.

If the player successfully hooks a second monkey they continue and try for a third monkey then fourth and so on. If the player drops any monkey in the chain they must return all the monkeys to the pile and it is the next players turn.

The player who creates the longest chain of monkeys is the winner. In the event of a tie the player that linked all the monkeys the fastest is declared the winner.

A popular variation to the game is to have a game set for each player. Players dump their monkeys on the table and all players race against the clock and each other to see who can successfully link all their monkeys the fastest.

Another variation has has players dumping the monkeys in the center of the table and all players compete with the same pile of monkeys to build the longest chain. This variation works best using two or more game sets.

No matter how you choose to play the game this simple classic is fun for all ages.